ABU DHABI, United Arab Emirates (AFP) – Oscar is beating the UAE’s summer heat by working out at a gym and hitting the treadmill two or three times a week. There’s nothing unusual about that—except that Oscar is a dog.

As soaring Gulf temperatures become unhealthy amid fears about the pace of climate change, those who can afford not to work outside in the blazing sun are staying in the air-conditioning.

And for owners of pampered pets who can make money, an air-conditioned dog gym has become an attractive option.

“In the winter I used to take him outside, but[in]the summer he stayed isolated,” says Oscar’s owner Mozalfa Khan, a Pakistani expat.

“Because whenever I take him outside, he gets sick from the heat.”

The resource-rich Gulf is among the regions most at risk from global warming, with some cities projected to become uninhabitable by the end of the century.

The UAE, like other Gulf countries, goes into partial hibernation during its long, hot summers, and those who can afford it remain secluded in air-conditioned homes and workplaces.

Oscar, a Welsh Corgi, is now training at Posh Pets Boutique and Spa in Abu Dhabi, a shop and grooming salon that claims to be the UAE’s first gym dedicated to dogs.

Staff carefully secure him with a harness to one of two adapted treadmills before he begins walking, with glass barriers on either side to prevent him from falling.

Rather than being set at specific speeds, the treadmills automatically adjust to each dog’s pace.

Oscar’s owner took him to the gym in the Emirati capital after a vet advised against taking him for a walk outside in the summer due to the risk of heat stroke. 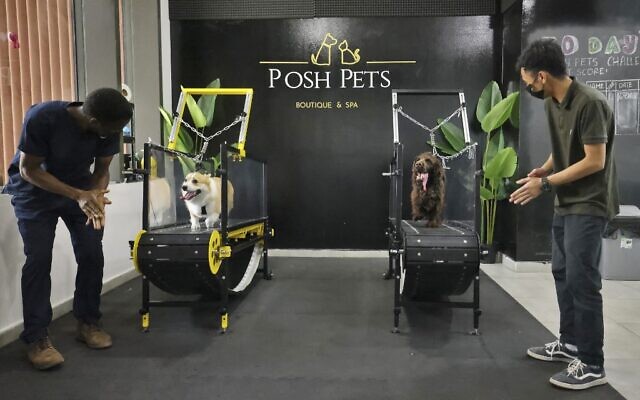 Dogs walk on a treadmill at Posh Pets boutique and spa in Abu Dhabi on August 16, 2022. (Karim SAHIB / AFP)

“It was really difficult for me last summer because there wasn’t a place like that,” says Khan.

With the high heat and humidity, “we only walk for two, three minutes and he’s done, he doesn’t want to walk.”

Mansour al-Hammadi, the dog-loving owner of Posh Pets, charges one dirham (US$0.25) per minute to use the treadmills, or US$7.5 for a half-hour walk.

Dogs should get at least 30 minutes of exercise a day, experts say. 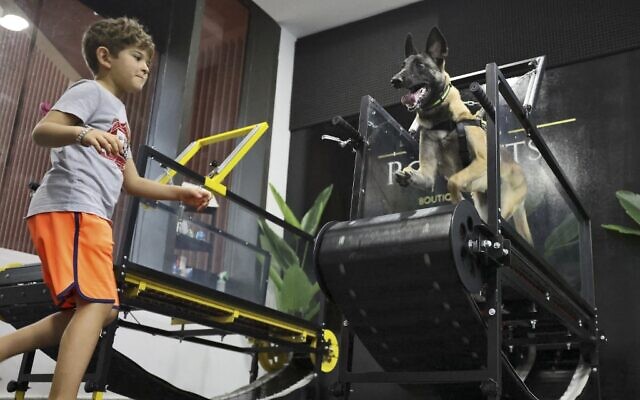 “Imagine if you could just let them run for a minute or two a day,” Hammadi tells AFP.

“We examined the project closely to make it 100 percent safe. Everything has been chosen carefully and not randomly, to avoid future problems and not harm the dogs,” he adds.

Destiny, a seven-month-old German shepherd, is another regular who hits the gym and plays with the other dogs.

Destiny can indeed be a bit exhausting. In a recent treadmill competition, she set the fastest speed.

You are an engaged reader

We are very pleased that you have read X Times of Israel article Last month.

That’s why we launched the Times of Israel ten years ago, to provide discerning readers like you with essential coverage of Israel and the Jewish world.

So now we have a request. Unlike other news agencies, we have not set up a paywall. However, as the journalism we do is expensive, we invite readers who have found The Times of Israel important to support our work by joining The Times of Israel Community.

Many Thanks,
David Horovitz, founding editor of the Times of Israel

Previous The TikTok dog trainer reveals the top eight breeds to own if you have kids
Next Ladder Capital Corp (NYSE:LADR) sees a significant drop in short-term interest